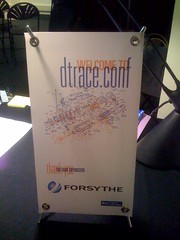 Perhaps it was the fact that one of the attendees was a former Enron IT employee (very bright guy), but a few minutes into dtrace.conf I was more than somewhat concerned about being exposed not as one of the smartest guys in the room, but one of the dumbest. Make that the dumbest.

That designation was as inevitable as it was deserved, given the cumulative brainpower of the attendees. When the 70 or so folks that packed into the San Francisco facility were asked for a show of hands for “you work below the kernel level,” there were a few handfuls raised. “At the kernel level” was probably half the room or better. “Above the kernel” and “applications” picked up the rest. And then there was the analyst in the room. One of these things is not like the other.

Anyhow, apart from taking me down a peg or three, the conference provided an excellent read on the health and overall well being of the relatively newly minted DTrace community. The verdict? Healthy.

Far more impressive than the numbers – which were pretty good for such the first iteration of such a narrowly focused day – was the breadth of participation. Only a third of the folks there were Sun, and the list of attendees included folks from Adobe, Apple, Barclays, FreeBSD, Fujitsu, Google, Joyent, Morgan Stanley, Ning, Salesforce.com, Sine Nomine, Songbird, University of Arizona, UC Santa Cruz, Virgin Mobile, VMWare, and Xen. Many of whom gave talks or presentations over the course of the day.

The last two examples, in fact, in VMWare and Xen spoke back to back, with no fights breaking out and no one turning up shanked. As far as I know, anyway. This, in spite of the fact that VMWare’s VProbes – a DTrace inspired equivalent that’s set to be introduced in VMWare Workstation 6.5 – is, or at least has the potential to be, directly competitive with DTrace. The gentleman from the University of Arizona spoke about DTrace-ing hardware; something that not only had I never heard of, but frankly didn’t know was possible.

As unconferences tend to be, dtrace.conf was wildly divergent; one session you might be learning about using DTrace to automate software documentation, the next might be a session on combining DTrace and Erlang. In between sessions you might be talking to a big bank about their experiences, the next Salesforce.com. And if you happen to be curious about why Apple, FreeBSD and others chose incorporating DTrace over competitive options or building your own, well, you can just ask them.

Many questions remain, like, why is Bryan’s ringtone the Knight Rider theme song, and who besides Brendan actually uses Dvorak? But all in all it was an interesting and compelling day, well worth the time to attend. Kudos to the DTrace guys for pulling it together, and thanks to the Forsythe guys for sponsoring the event so that we had actual meals of food. And I almost forgot: the Joyent guys for that most important contribution, the keg of Liberty Ale.

I do still want a sticker.

Leave a Reply to tecosystems » The View from ZendCon Cancel reply