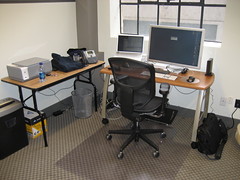 Monday through Friday trips always take a lot out of me, and this past week was no exception. Particularly given the extracurricular slate, which was trying. I’m just not 22 any more, much as my gray-free head of hair might argue to the contrary. No gray, you hear me?

Fortunately, I’ve got no travel on the docket this week until Friday morning, when I’m flying out of Denver to Minnesota to go ice fishing with my brother and his brother-in-law for the weekend. Because what’s better than sitting in a tiny heated shack on a Minnesota lake over a tiny hole in the ice cut with a chainsaw?

Exactly: doing that, but with alcohol.

Anyhow, as a respite from a day of experimentation with desktop recording clients and office administrivia, here’s your belated Friday Grab Bag on a Sunday.

It has not gone unnoticed at the Crowd Favorite digs that I’m the sole worker there without an oversized monitor (I’m like the kid with no shoes that the other kids make fun of), meaning one that’s at least 24 inches diagonally, if not 30. While everyone else is happily gazing at immense displays, I squint away at my 12.1, 1024×768 Thinkpad LCD. Which was much easier before I knew anything better. Raise your hand if you’re surprised that I’m blind.

At first I protested that not being in an active development role, this was clearly unnecessary because how often did I need to tab back and forth between applications. Then I considered how often I toggle between Emacs and Firefox and shut my mouth.

At this point, I can’t justify the capital expenditure considering that I’ve recently acquired a Mac Mini and will be replacing my Thinkpad within the next month or two if some of the recent laptop rumors prove true. But when I return from the east next fall? A better monitor could well be in my future.

Blame Joe for this, but it looks as if I’m rapidly on my way to becoming a full fledged Emacs convert. Attempts made in the past aborted after a few days, but I’ve been Emacs only for text authoring purposes for two weeks or thereabouts, so this time – third, fourth or whatever – may be the charm.

Which I’m mostly happy about, given that Stephenson once described the program thusly:

Emacs outshines all other editing software in approximately the same way that the noonday sun does the stars. It is not just bigger and brighter; it simply makes everything else vanish.

For those Linux users that are interested in giving it a whirl, but are beyond horrified by the non-antialiased monstrosity that is the default package, I recommend Alexandre Vassalotti’s Pretty Emacs package, which is GTK enabled, pipes in the Xfont backend and so on. It also simplifies a modification to the white-on-black color scheme I favor.

Remember, pretty is a feature.

This past week I finally hit the wall with Firefox 2.0. 5+ lockups per day is simply too much, and was beginning to significantly impact my productivity. Not just in frequency, but duration: unlike its successor, when 2.0 exits, it doesn’t exit quickly. Before being killed, it will wildly vacillate between responsive and non-responsive states, such that you’d spend longer determining whether or not it was actually going to crash than it would to kill and restart it.

After seeing that the Firefox 3.0 preview binaries had made their way into the main Gusty repositories, then, I resolved to cut over from 2.0 to 3.0. I haven’t burned the boats, precisely, as my 2.0 instance was left intact in case I need to revert, but I’ve set things up in 3.0 as if for permanent residence. Bookmarks migration, reinstallation of Flash (3.0 can’t see the default instance that Ubuntu lays down), and so on.

The biggest catch is the extensions I’m leaving behind due to their incompatibility with 3.0 ; no more del.icio.us bookmarks, no more Gmail Manager, no more EC2 UI, no more Google Gears, no more MediaPlayer Connectivity, no more Tabbrowser Preferences, etc.

But thus far, those sacrifices have been more than justified by the performance of 3.0. It may crash slightly only less frequently than 2.0, but when it crashes, it crashes fast and – more importantly – comes back near instantly.

I’m hopeful that this change proves permanent, and that I can wish Firefox 2.0 – which served me well in its day – a fond farewell.

Interestingly, though, few of the owners I spoke with use the iPod capabilities as actively as I do. The walking away winner for most common complaint? Not the lack of 3G, as you might guess, but rather the keyboard. One man’s trash is another’s treasure, as always. I consider that one of its more valuable features, personally.

In one of the world’s most convenient travel coincidences, my younger brother was stranded at DIA Friday…not half an hour before I touched down myself returning from San Francisco.

Before driving him to the airport the following morning, we had the opportunity to catch up on a variety of subjects (if his assertions regarding our economy are correct, and they usually are, we’re all in serious, serious trouble) – but one in particular caught my interest: LASIK.

The subject came up because – not being able to transport liquids in a carry-on – we had to make a pitstop at a 24hr Walgreen’s to procure saline for his contacts. He’s considering the surgery, which made me ponder it in turn.

While there’s a certain charm in the only-being-able-to-see-10-feet thing, it seems like there’d be a lot more charm in being able to see. Like a human. And if the prices have indeed come down to $2K for reputable treatment, I may have to seriously consider it. Particularly if I can make enough renting my place in Denver this summer to cover it.

Have any of you been lasered? Would you recommend it? Or will my eyes fall out like Flanders’ did 10 years hence?

While I’m not exactly carrying around a sign saying “Repent, for the end is near,” the rumors that I’ve acquired a Mac are, in fact, true. Given that I tend to be hands on as an analyst – I know, it’s weird, I like to actually use the technologies I cover – it’s frankly surprising that it took so long.

My initial experience hasn’t exactly been seamless – the first Mini I acquired had to be swapped for a bad optical drive, and the second insists on dropping the Apple bluetooth keyboard I’d planned to use – but overall OS X has been pleasant. More capable in some areas, less in others, but pretty all the time.

Anyway, apart from Fusion and Parallels which I’m working to acquire, I thought it might be useful – in the spirit of Erik’s list – to document some of the OS X applications I’ve been evaluating.

Suggestions, as always, are welcome.