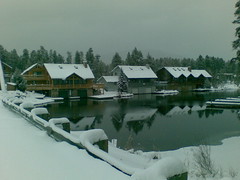 The key is to kill yourself just enough in the afternoon that the food and beverages taste deserved, and the sweeter for it. Or so I’m told.

After a barely white knuckle transit up to Grand Lake yesterday morning, a friend and I donned the snowshoes and requisite gear and proceeded into Rocky Mountain National park. Rather than proceed amiably along the trail to its termination point near the Shadow Mountain dam, we hung a sharp left after about a half a mile and proceeded up a hill. One that would be called a mountain were I back east. Not sort of uphill, mind you, but rather straight up and down. This is looking down from the halfway point of our little trek.

An hour or so of scrabbling up the untended, snowy trail later we had a quick reward, then cut bait and headed back down the trail. I’m happy to report that those of you who took the over on the number of times I fell while navigating the slick, steep and root marred trail back down would be disappointed: only twice did I bail. Though to be fair I did manage to sled about 200 feet the first time down.

Following this manageable physical exertion, we walked into town to indulge in an afternoon of bowling and Odell’s Extra Special Red. While I’m not much for bowling, I did manage a few clutch strikes to redeem an otherwise sorry performance. Also, the red is absolutely exquisite, and is highly recommended. Just watch the alcohol percentage. At 8%, it’s got twice that of an ordinary beer. In related news, the last game bowled was easily the worst for either of us on the day. Rumors that it was a career low for me are just that.

Dinner was procured at the traditional Mexican venue of Pancho and Lefty‘s, which makes up in personality what it gives up in quality. If you find yourself in Grand Lake, understand that it may not be the best Mexican you’ve had, but it will be the best Mexican around.

And then it was time to make the trek home. All in all, a massively relaxing day, which could not have been better timed given the past few weeks. After wrapping up some loose ends this afternoon and – likely – tomorrow morning, I’m going to be out for two full weeks as usual. Meaning that GrandCentral will not be connecting you to my actual phones, I won’t be reading email, and the only blogs produced will be about as relevant as this one.

Next time we chat, officially, I’ll hopefully a.) be light quite a few household items (craigslist and eBay figure prominently in my vacation plans – anybody in the Denver area want an old stereo or minifridge?), b.) have a batch or two of beer fermenting its way to glory, and c.) be more or less recharged. Enjoy the holidays if you celebrate them, and otherwise stay safe.