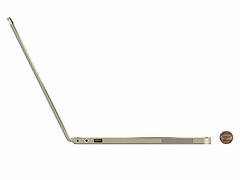 Although no one that I’ve read has chosen to put it thus, it seems clear to me that the Metro prototype is the end result of Intel frustration. Necessity being the mother of invention and all that, it must have galled Intel to keep cranking out faster, smaller and more power efficient mobile chipsets only to see them crammed into dull, uninspired laptop designs. Yes, the Apple win guaranteed them at least one manufacturer of sexy hardware, but their closed ecosystem can’t promise the volume that gets a giant like Intel genuinely excited.

This continuing lack of design inspriration ultimately forced Intel’s hand. In an effort to demonstrate just how egregiously virtually every laptop maker on the planet was dropping the ball, Intel and its chosen design partner Ziba showed them all up. The working prototype they produced was a quarter inch thicker than a Motorola RAZR, weighed in at 2 and a quarter pounds, had virtually every wireless technology known to man on board, and featured both a solid state drive and some absurd LCD technology (capable of 1080p). Oh, and the battery life? 14 hours.

Unfortunately, like the concept cars historically created by automakers solely for the purpose of teasing enthusiasts, there were no immediate production plans. Engadget reported that an Intel “representative walking the reporter through the laptop confirms that this is purely a concept device, and is really only aimed at encouraging OEMs to develop similar models.” Yes, you read that correctly. The thing exists, works, everyone wants it, but there are no plans to manufacture it. Of course.

Back on the market for a laptop myself, I chose to put my stock/hopes in an alternate rumor. BusinessWeek claimed that an OEM was in fact lined up, saying that while “Intel hasn’t announced an official release date…people familiar with the matter say a PC maker will announce plans to start manufacturing the machine later this year.” Far more promising. Except that it’s almost October and I haven’t heard a thing. Now I’m not exactly scooping these rumors right and left, so that in and of itself means little. But when the folks that are scooping these rumors right and left haven’t heard more than I have, well, let’s just say it’s not looking good.

Hope is not lost, however. Intel needs an OEM, and I’ve got one for them: your new best friends forever over at Sun.

I know, I know. In spite of the fact that Intel and Sun, once enemies, are now friends, the problems are many. Sun makes servers, not laptops (this thing notwithstanding). Sun doesn’t own a consumer oriented operating system. For that matter, Sun doesn’t sell anything to consumers directly, period. Let alone handle that type of support.

But consider that they just rebranded their ticker symbol to JAVA at least in part because of the consumer recognition factor. That Sun, more than perhaps any of the enterprise players, realizes that walls between consumer and enterprise are collapsing (think iPhone). That the fact that the premium laptop (> $2k) market has been stagnant has at least as much to do with the absence of anything worth that kind of cash as it does with the addressable market size. That Project Indiana – an effort to make the OpenSolaris and Solaris technologies more accessible (among other things) – could use a sexy platform over which they have total hardward control (AKA the Apple card). And for the folks that don’t want Solaris, well as it turns out Sun OEMs Windows now. Or curry even more favor in the open source ranks and throw Ubuntu on there (that’s the version I’d buy).

Hell, the design’s already been worked out. How hard could it be? Slap a Sun badge on that sucker and watch them fly off the shelves. Ok, maybe it’s not quite that simple. But still. Sun’s already in the premium hardware business on the enterprise side. How much of a jump would it be, really, to be in the premium laptop business as well?

Before anyone gets enthusiastic, however, I should confess that this is not the first time I’ve suggested that Sun make their own laptops. I’ve had little luck persuading Sun’s John Fowler on this front before, but the landscape (and his job title) has changed since the last time we spoke. I’d love to hear what his answer might be these days.

Either way, I don’t really care who makes the thing, I just want one. My X40 works flawlessly on Linux, but struggles to run Firefox, Songbird, Pidgin, Google Desktop, Tomboy, MySQL and Apache simultaneously. Ergo, I can only hold out for a new machine for so long, folks.

Time is of the essence: there’s a market to be captured.

P.S. Whoever ends up doing the work, please get a pointing stick onto the machine – I hate touchpads. And ditch the weird purse-like straps. Thanks.

Disclosure: Sun is a RedMonk client, Apple and Intel are not.