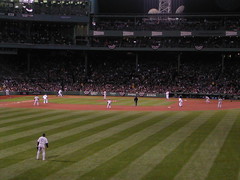 Had hoped to have the Salesforce.com wrap up for you this afternoon, but work keeps getting in the way. That, and I’m using Salesforce.com to try and make a larger point, which is taking longer than I’d expected. But I’ll try and polish it off tomorrow on the train. What train? The train that’s taking me home. Home of a sort, anyway. So, where I’ll be the remainder of the week.

Catching the 8 AM Downeaster (brutal) out of Portland to Boston’s North Station. Apart from lunch with a friend whose baby was due a week back, which should be interesting, I’ll be roaming the streets of Boston so lock up your valuables.

At some positively unholy hour I’ll be up and over to Logan, where I’ll catch a flight over to SFO. Yes, again. After an afternoon client visit, I’ll be adjourning to my evening residence – as yet TBD. Signs point to something in San Francisco, but will keep everyone posted. James and I are likely to catch up for a rare RedMonk face to face, so if you’re in the area feel free to come witness this unusual event.

James and I will be heading down the valley…again, venue TBD…for a day on site with a client. After that, we’re going to try to catch up with a prospective client, and at some point I’ll head back over to SFO to begin the return trip home. Because I heart red eyes.

In case you’re wondering, yes, I have travelled every week this month, and yes I am racking up the miles. If only I could use them…