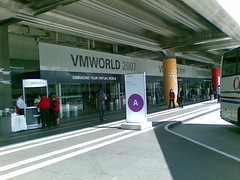 “Some people, when confronted with a problem, think ‘I know, I’ll use regular expressions.’ Now they have two problems.” – jwz

What surprised me when I saw Rafe linking to jwz’s famous indictment of regular expressions wasn’t the fact that it still made me laugh. The man, after all, is one of the funniest bloggers on the planet.

What took me by surprise was the quick and nearly unconscious mental substitution I did for ‘regular expressions,’ swapping it for ‘virtualization.’ This famous turn of phrase, the more I considered it, could just as easily be applied to the technology that brought thousands to Moscone last week for VMWorld.

I certainly do not question the relevance of virtualization technologies. My first introduction to the concept came during my mainframe days, and the utility was obvious even at that stage of my career. These days, I use it most frequently as a test platform, with which I can spin up instances of BSD, Gentoo, Fedora, OpenSuSE, Solaris, et al on a whim, but in listening to VMWare customers like BP last week it’s obvious that serious production deployments are increasingly the rule rather than the exception.

It was just as obvious, however, that virtualization comes with a cost and an overhead that may or may not be immediately obvious. In that respect, it’s much like the ability to delegate granular permissions to identity and single-sign-on systems. In principle, it’s a no brainer, as the initial returns are excellent, what with the removal of centralized bottlenecks. Longer term, however, the benefits are countered with a significant management cost.

Virtualization, on some level, is no different. Greg Smith of T-systems, a division of Deutche Telecom, was unequivocal on the subject, identitying management as the greatest single challenge posed by virtualization technologies during a customer panel. His pithy summation was, “you’ve actually made your world more complicated.”

Consider that with the volume of machines suddenly unconstrained by physical hardware, customers could suddenly find themselves managing far more machines than (ever) before – virtual though they may be – and you get an idea of the scope of the challenge. VMWare clearly appreciates this, as nearly every product briefing is accompanied by descriptions of management capabilities.

The challenge isn’t purely related to volume management, however. The technical boundaries between operating system and application that can be blurred or removed entirely by virtualization technologies, as epitomized by the virtual appliance notion championed by VMWare (and that I’m skeptical of), raise entirely new questions with respect to support and by proxy, management. Enterprise customers generally have a handle on supporting multiple general purpose operating systems, but if one follows virtual appliances to its logical conclusion it’s possible that each application running within a virtual appliance is running not a general purpose operation system but one tailored specifically to it.

Daunting as the prospects of management may appear upon further consideration may be, the point here is not to discount the potential of virtualization. Quite the contrary. Customers obviously find the benefits sufficiently compelling to invest and invest heavily in – from the server all the way down to the desktop. And speaking of investing, the financial markets seem more than slightly convinced of the opportunities inherent in virtualization.

This enthusiasm is not terribly surprising, in light of some of the customer case studies. During the VMWare customer panel last week, Frank Sabatelli from Igor related his firms experiences migrating the desktops for an entire office from Florida to North Carolina, virtually overnight, to escape the path of an inbound hurricane.

Not every customer is quite as incented, of course, but there is little doubt at this point that virtualization is poised to fundamentally reshape, well, pretty much everything. What remains to be seen is who the winners will be. VMWare is clearly in the drivers seat, but will face ever more serious competition from the open source and proprietary worlds alike. Should be fun to watch.

Leave a Reply to tecosystems » Fedora 8: Close, But No Cigar Cancel reply