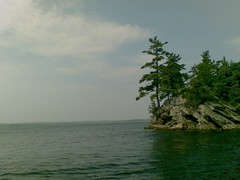 Call me Peter Pan. Beats the hell out of Ishmael.

I will not hear of the end of summer, understood? I know better than most how many games are left on the Red Sox schedule. I fully understand that Labor Day is almost upon us. I’m also peripherally aware that some unfortunate children are already off to school.

But I’m still here in Maine. The boat and the dock are still in the water. And it’s still warm. Well, for the past two days it has been, anyway.

Look, it’s not that I don’t care for Fall. I’ve been a big fan of the season ever since my football career ended midway through Williams, and leafy Autumn afternoons became something other than prolonged experiments in how to fill one of my feet or the other with blood that turned slowly from purple to a jaundiced yellow.

But an end to summer means an end to many things that are good. Not getting on planes, for one. Days of dangling your feet in the water next to a bag of beers, for another. Lazy afternoons of not catching any fish and enjoying every minute of it. Being stopped by random people on the street eager for the Red Score, the Yankees score, or both. Throwing high and tight on someone brave enough to step in against me in Wiffle. Leisurely train rides to see friends in Boston. Visits from friends, family, or both. The feeling of salt drying on your skin. Falling asleep to the sound of crickets and owls. Listening to the water lap softly against the shore. Walking out of the park, The Standells providing the processional.

Not interested, sorry. Summer arrived only lately, and candidly hasn’t put a lot of effort into its act. If there’s justice in this world, Fall will miss its stage cue, and take its sweet time burning off our remaining foliage via some particularly vivid and photogenic hues.

For the next week (plus Labor Day), I’ll be plotting my revenge on Mother Nature. Also, the Powerball agents that shockingly denied me my rightful $314 million dollars. Who’s with me?

To ensure my full concentration on the wrongs done me, I’ll be taking the week off from email and voicemail. Not to mention work. In the meantime, seek me on the water. Or in real Portland. Or Monhegan Island. Or Boston. Whatever.

I’ll be the one strong-arming Summer into sticking around a wee bit longer. Wearing a salt-stained Sox hat, of course.