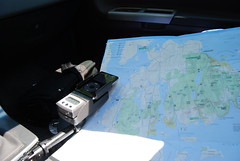 Acadia National Park really is that gorgeous. While it’s amateur hour whenever I pick up a camera, my Flickr set or Google Map should give you some indication of the quality of the scenery. Use your imagination to fill in the blanks. Or sun, as the case may be.

The logistics are a bit problematic, yes. Mt Desert Island is truly Down East, which is Maine for “really frigging far.” It’s not Presque Isle far, but it’s sure not close. I’m 2 plus hours north of Boston here in Georgetown, and Acadia National Park is 3 hours north of me whichever route you take. Even I can do that math, and it equals you’ll be in the car for a while.

But a.) there are some great places to stop along the way (Camden, Freeport, Portland, hell – stop by Georgetown), b.) there’s a near(ish) airport in Bangor, and c.) there were tons of families with small children there, so no excuses are accepted.

The park has all of the usual distractions in fishing, hiking, scenery and the freshest seafood you could ask for, along with some less conventional ones like carriage trails, whale watches, and a ferry to Nova Scotia.

The net? If you’ve got some vacation time to blow, trust me: just go. It’s well worth the travel time.

The island is compelling enough, in fact, that I’m strongly considering retiring here after Google buys us out for megabucks 😉 A little place by the water, a good boat, and I’m a happy camper. The island’s even defensible in the event of a great plague – always a strong selling point with me. The main problem with living on Mt Desert Island would be the airport: a.) it’s in decline, and b.) none of my airlines of choice (Frontier, JetBlue, etc) fly in there.

What else sold me? Well, I have the usual excessively detailed account of my brief Acadia Adventure below, but that’s likely to be of marginal interest. Most readers will want to skip the rest as it’s serious overkill – even by my standards.

In other words, don’t say I didn’t warn you.

Things did not start well. First, the forecast was ugly – thunderstorms playing a prominent role. After some debate I decided this would work in my favor to depress traffic and scare people away from the campground I intended to stay at.

So I headed north.

Once into Woolwich (one town north of me) I remembered that I’d left my camera cable back at the office in Brunswick – 20 miles or so in the wrong direction.

So I headed south. Then north. Again.

On arriving in Wiscasset – the next town up from Woolwich – I discovered that while I’d packed a bag for the camera and driven all the way back to Brunswick for the camera cable, I hadn’t actually brought the camera itself.

So I headed south. Again. Then north. Ag…you get the point.

Eventually I was on the road again,[1] and enjoyed a nice ride up through the beautiful Camden and Rockland and the underrated Thomaston. Thus I cruised through midcoast Maine until I was passing through Lincolnville. Downtown Lincolnville features a beach. The beach features good views of the Islesboro ferry. Which, I thought, would make a good picture. So I jumped out, got ready to shoot, and discovered that I’d locked my keys in my car.[2] With my phone. And worse, my Sox hat.

Hatless, phoneless, and keyless I considered the lesson for the day – I’m an idiot – as I walked across the street to the “Beach Store.” Long story short, the kids in there couldn’t have been nicer – letting me use a cellphone to call AAA – and nearly three hours later a wrecker showed up. Five minutes after that – they were into the car scary fast – I was back on my way.

Just south of Bucksport, I was amazed to discover a new looking massive suspension bridge crossing the Penobscot. I was equally amazed to see that same bridge written up in the Times a couple of days ago.

Due to the minor delays retrieving items I was too dumb to pack and the massive delay retrieving keys I was too dumb to put in my pocket, my original plan of rolling into the park in the early afternoon was blown. I hit the visitor center instead a bit after six, and with the sun going down in less than two hours figuring out where I was going to sleep seemed like a good idea. Also, what I might do for dinner.

Lodging ended up car camping down at the Seawall site in the park (bathrooms and cold water, but no showers), while dinner was swiss cheese on wheat bread with mustard. Efforts to grill the combination resulted in a small fire. Efforts to toast the bread resulted in a slightly larger fire. Lack of equipment, you see. All that was left, then, was a cold dinner on a cool night. There were beers, though, so all was not lost.

The lack of a Thermarest was unfortunate, given that the ground was fairly coarse sized gravel, but with a couple of beach towels I setup a nest where – if I didn’t move more than an inch in any direction at any point – it would be akin to sleeping on a very hard floor.

My alarm clock went off at 3:40 AM to give me time to make sunrise at Cadillac Mountain – it’s apparently the first place on the East Coast to see it come up. Sitting up in my sleeping bag, I pondered the fact I didn’t know where Cadillac Mountain was, precisely, nor what time sunrise would be, and lay immediately back down.

A couple of hours later, one of my neighbors decided to start banging their pots together so it’s time for everyone with in a half mile radius to get up.

First up, I headed south from Seawall over to Bass Harbor to get some shots of the lighthouse. The sky was overcast and Weather.com was full of dire predictions for rain.

Next, I drove up Cadillac Mountain (the hike takes hours I didn’t have) to get some shots of the view. The sky was still overcast, and Weather.com’s predictions were worse than before.

Seeking to use my weather window as best I can, I sped down Cadillac and hiked down the eastern coast of Mr Desert Island, seeing Sand Beach, Thunder Hole, the Otter Cliffs and Otter Point in a series of quick, strategic strikes. The weather was still gray, but now with light rain.

Time for lunch. Venue was Geddy’s in Bar Harbor. Very touristy, but the crab was good. Still raining. Killed the rest of the afternoon sleeping on my towel nest in the tent.

Early evening I headed back over to Bar Harbor for dinner (of the four towns on the island, it’s the only one that has bars as far as I can tell). Grabbed a Smithwick’s at Leary’s, discovered they don’t serve dinner on Monday’s, and headed over to McKay’s Public House on the bartender’s recommendation. Both good venues.

Then it was all the way back across the island to my campsite for an early bedtime so that I could make a 3:30 wakeup for sunrise on Cadillac (which I’d discovered was at 4:58).

On the way back from brushing my teeth in the cold water spigot, I noticed that my feet were bleeding. Apparently they disapproved of hiking a mile or two over loose rock and small cliffs in flip-flops. One more day, I promised – just give me one more day.

The alarm went off as scheduled, but I must have missed it by a minute or two because I heard someone in a nearby tent lightly swearing. Almost knocking the tent over getting dressed, once I’m extracted from the tent and fly combination – which is soaked from the night’s storm – I can’t see anything but fog. Didn’t think much of it.

Started climbing Cadillac with about four other cars. Fog was everywhere. We went 5 or 10 miles an hour, tops. Thought more of it.

Arrived at the top of Cadillac Mountain. Fog was everywhere, but thicker. Started thinking heavily about it at that point. As were, presumably, the two or so dozen other poor souls that joined me on top of Cadillac for the occasion. At 4:39 I took my first shot, and discovered that the D40x’s insistence on using a flash was a poor one given that light and fog don’t get along. Five minutes later, at 4:44, I figured out how to force it to shoot sans flash, and got this illuminating shot. One minute after that, at 4:45 <a href="http://www.flickr.com/photos/sog/772795169/in/set-72157600754952094/"these folks began laughing way too hard at our mutual predicament. It was early, remember.

4:58 comes and goes. No sign of the sun. A lady next to me who’s got some ginormous (it’s a word now, you know) lens on a full tripod began sniffling and tearing up. Three families leave, but at least they’re laughing. I don’t tell anyone, but I’d been secretly hoping that the sun would burn off the fog magically once it was up. Nothing doing. For all we know, it has the day off like I do. This is the view to what I assume was the east at 5:05 – 7 minutes after the sun was supposed to rise. If you can see a sun in there, let me know.

20 minutes later, I was the last one left at the lower ledge, forlornly waiting for an opportunity to shoot something. I got up at 3:30, after all. The fog apparently didn’t get that memo, however. I can’t do better than 10 MPH on the way down, thanks to the fog.

Back at the campsite, I fall back asleep amidst the fog, and am woken by a car alarm around 9:30. For the first time in days, there’s sun. And it’s not raining.

Packing everything up and “checking out” of the campground, I headed north up to Echo Lake. The kids are having a grand old time scaring the crap out of the resident ducks. And running in front of the camera. Eagle Lake, to the east, seemed like a better bet for some quality time with the device.

The original plan was to circuit the lake on one of the quaint little carriage trails. My cracked and bleeding feet quickly vetoed that plan, however, as I was limping heavily after maybe a mile and a half. Unsurprisingly, the mile and a half back to the car was worse.

With limited mobility until I can procure duct tape, I decided to tour the island further to get a better handle on the geography, and after a quick tour I decided to head for home.

Duct tape was eventually acquired in Wiscasset around three – heaven.

[1] The soundtrack for the ride was not my usual WOXY-fare, but an oldies-themed playlist created specially for the occasion. Barry McGuire, The Beatles, Cat Stevens, CSNY, Donovan, The Doors, Howlin Wolf, Joan Baez, Simon & Garfunkel, The Stones, Van Morrison and a host of other tracks that would make Wes Anderson proud. And on that note, Bob (Sutor) will be happy to learn that Bob (Dylan) was well represented.

[2] I can’t absolutely certain, but I’m fairly sure that’s the first time I’ve done that. Ever. I’m usually very OCD about my keys (and pretty much everything else).

Leave a Reply to tecosystems » 2007: The Year in Review, from Macro to Micro Cancel reply