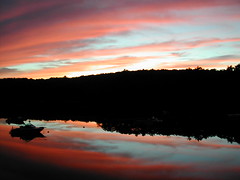 JavaOne, as expected, is a madhouse. Lots of news, lots of conversations, and, of course, lots of people. I started a post on JavaFX, but have decided to fold that into a larger conversation on Apollo, Silverlight, and so on. There’s too much to discuss, and too much context to tackle the issue in a single post. So instead you get the infamous: stay tuned.

In the meantime, a quick update for interested parties on my travel schedule, which has been decidedly amorphous of late. As an unfortunate consequence of an early bedtime last night (10 PM), I happened to find myself wide awake at 5 AM this morning and set about finalizing the details of my annual summer migration back east.

Many of you know that I elect to work out of my pseudo-homestate of Maine for the summer, braving the state birds for another summer on the water. I’m happy to report that I now have a reasonably firm migration schedule in place, after the final pieces of the puzzle – the dock hauling schedule, cat sitting availability, etc – fell into place yesterday.

Before I get to the logistics, however, let me reassure the Colorado contingent that I Shall Return. Cote, James and I ran into Bruce Snyder last night at Chevy’s, and apparently I’ve been less than clear on the point, so for the record the plan – subject to the Sox performance – is to return to Denver sometime after Labor Day.

Back on topic, my schedule is shaping up something like this:

Will be gathering friends, acquaintances and enemies (I like to keep them close) at Cap City, say 7ish, for a (temporary) farewell dinner and beers. If you’re in the area, swing by and say hi.

Az is about as good a cat as you’re going to find, and there are very few things she doesn’t do well. Regrettably, traveling is one of them. The prospect of two and a half days in the car listening to her horrible, plaintive mewling is decidedly unattractive. Not to mention that I’d like to keep her discomfort and misery to a minimum. Ergo, I make a special trip just to fly her out.

It’s going to be AWESOME.

The Long Drive commences. And for the wise asses in the audience, yes I will be sure that my registration is up to date before I set out. After sleeping in on Thursday morning, I’ll get up, cram my car full of a random assortment of fishing gear, workstations and monitors, and appropriate summer attire, and then make a right off Platte St onto I-25N. Two and a half days later or so, the Great Spirit willing, I’ll make a left off ME-127 onto Shipwreck Lane – AKA our driveway.

Just so that I don’t get out of practice traveling, I’ll be catching an afternoon flight out of Portland over to San Francisco (Jet Blue now flies in there in addition to OAK – great news) in order to attend Microsoft’s pre-OSBC show NXT. Oh, and I’ll be speaking there: more details on that shortly.

Yet another subject deserving of more commentary later, I’ve been noodling on the impacts – both positive and negative – that connectivity has brought to our lives. Specifically in the context of my upcoming drive, there will be no less than three ways to track my progress (Flickr/Twitter/Wordpress – Dopplr, maybe?), and three ways to get in touch (cell/Grand Central/SMS).

You’d have to be bored – and I mean scary bored – to be interested in the mundane details of my trip, but I’m of the belief that there is nonetheless value in the annotation it provides. What if I didn’t make it? You’d at least have a partial record of where I might have gotten to. Or, more likely, what if you need to get a hold of me – you’ll be able to tell approximately where I am.

I haven’t thought through or digested all of the implications of the technology that’s increasingly available to us for free, but there’s little doubt in my mind that they’re profound.