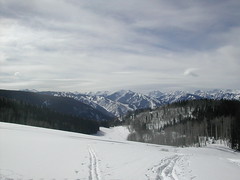 Ever have a grandparent tell you about how back in their day, they used to have to walk six miles uphill in the snow to school? [1] If so, I encourage you to look at them with a newfound respect, because after doing it on Saturday I can confirm that it’s hard. Seriously hard. Our destination was not school but rather a hut with no running water, a woodstove for heat, and an outhouse (obviously), but the principle’s the same.

Fortunately for me, and unfortunately for a couple of friends that were looking forward to inheriting some of my electronic equipment in the event of an untimely demise, I made the trip up and back with no real issues whatsoever. One mild blister, easily remedied with some of the second skin stuff (which is terrific, if you haven’t used it), a bit of lower back stiffness from my pack, and that’s about it.

Saturday, a group of 12 of us started the 5.7 mile hike (mostly uphill) to the McNamara Hut near Aspen around 9:30 in the morning. While it cooled off a bit later in the day as the sun hid behind some clouds, we were generally gifted with some great weather. It was warm enough, in fact, that most of us were hiking in just a base layer plus vest. After a couple of the older participants chose to turn around early due mostly to fatigue, the rest of us pushed on and made it to the hut – elevation just shy of 11,000 feet – between 2 and 3 in the afternoon. After firing up the woodstove, we got around to a.) consuming the beverages I and a couple of the other guys had hiked up,[2] b.) chopping some wood (which I actually enjoy), c.) playing some cards (Uno is just as fun as I remember from my childhood), d.) cooking dinner (rice, steak, and veggies), and e.) crashing very early in the evening (9:30ish, in some cases).

Sunday saw us leave the hut around 10 in the morning, arriving back at the cars before 1 in the afternoon. It’s easier, as it turns out, to hike downhill than it is uphill. Just in case you were curious.

The ride back from Aspen, regrettably, was not nearly as trouble free as the trip itself. We made it through Vail with no traffic whatsoever and thought we might be home free, but were stalled out about 20 miles west of the Eisenhower Tunnel.[3] As it turned out, there was an accident on the eastern side of the tunnel which shut the main east-west artery down to a single lane. That would have been bad enough, but given that the X-Games were being held in Aspen the same weekend, that meant serious traffic. As in 3 and a half hours worth, making our total transit time 7 and a half hours versus the normal four. As in enough traffic to blow a friends flight out, meaning that I had to get up a bit after three to drive her to the airport.

But all’s well that ends well, as they say, and the hut trip was definitely time well spent. I’m glad I don’t have another one coming up this weekend, but it was fun. Highly recommended if you’re of the outdoorsy persuasion. If you’re interested, pictures from the weekend are up in a set here [4] – thanks to the F-Spot hackers for making the Flickr upload process such a trivial exercise.

[1] A friend and I were chatting yesterday about our corollary: how kids today don’t understand how much of a pain it was to sit around and try and record your favorite song off the radio.

[2] As I was telling James on #redmonk, I did not succeed in poisoning my fellow hikers, although it wasn’t due to a lack of effort. I was instead doomed by the fact that said hikers had just trudged up six miles uphill through snow, meaning that I probably could have brought Thunderbird and not gotten a complaint.

[3] Which is an amazing feat of engineering, for those that are interested in such things.

[4] The obstructions in a couple of the shots are either my thumbs, some snow (the camera was dropped multiple times), or a combination of both. It was cold – what can I say?