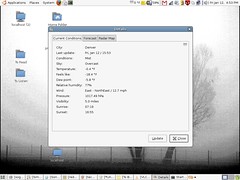 As Matt notes, for the fourth Friday in a row Denver’s going to see snow. Unlike the other Friday’s, however, this week’s storm is accompanied by some seriously cold weather. Not 22 degrees cold like CA is seeing, but “feels like -18” cold. I guess I should be thankful that we’re not (quite) to this point (yet).

Given the absolute zero weather, today’s been a day to sit inside and not venture outside. Or would have been, had I not been required to head out and deposit some checks and grab lunch. I have to hope the weather doesn’t take a turn for the worse, because I’ve hoarded precisely nothing in the way of supplies.

In the meantime, here’s another Friday grab bag of items that don’t really deserve their own posts.

Despite a couple of suggestions from readers, I’ve had no joy getting my iTunes library situation resolved and am more or less resigned to losing the playlists in question (though I have backups of the corrupt library in case someone comes up with a fix) and restoring – hopefully – from my June backup. I will not, however, be restoring the library until I’ve backed up my music to present. I’ve heard too many horror stories about iTunes 7 deleting music to trust it in the wake of this unpleasant incident.

Speaking of personal backups, I’ve finally settled on S3 as the will-be solution to my backup issues. I’ll maintain local copies for the sake of convenience, but given the fact that my music collection is – apart from my apartment – my most valuable material possession (I’m pretty sure it’s worth more than my car), I need offsite backups and S3 is the solution of choice. The problem is a.) the size of my music collection (50 GBs+; small by some standards, but large enough to be a problem), and b.) my absurdly slow upload cap (768, I think). Forgetting the math, because of spikes in upload capacity, it’s going to take days for the collection to upload. During that time, my local bandwidth will be negatively impacted, so the current plan is to initiate the sync to S3 shortly before I head to Boston next week for Mashup Camp. The upload client I’ve selected – it’s a Windows box, so this solution would require too much overhead – is JungleDisk. Anybody happen to know how it will behave if the upload is terminated prematurely?

Very shortly, I expect to be implementing an S3 based backup solution for both my work client (bishop) and server (hicks), but in the interim I’ll continue rsyncing our various assets to a variety of locations. One of the key components to our MySQL backup processes will be Zmanda’s ZRM client; an open source backup utility that utilizes the standard mysqldump facility to export MySQL DB’s, and schedules their backup and deletion. I had an excellent conversation with Zmanda this week, and will have a lot more to say on that subject after I’ve implemented the tool. Their recent decision to support Ubuntu is a good one from both a customer and analyst’s perspective (beats converting the RPM’s to DEBs via Alien), though I’d hoped that they would have made it into the Ubuntu/Canonical repositories already. Zmanda tells me that that problem should be solved shortly, however.

On a totally unrelated subject, I somehow had not appreciated just how cool Flickr’s geotagging feature was. I remember thinking it was interesting when it launched, but somehow in the crush of other responsibilities I’d missed the significance. I’ve only begun playing around with it, but being able to browse photos via map is a fascinating exercise. I need to take some time and start tagging some of my pictures as best I can.

For the three of you that read the Nerd Vittles piece on connecting your Asterisk implementations to PTSN lines (regular phone lines for the non-VOIP geeks in the audience) via a SPA-3000, but clicked through only to click through and find out that Voxilla doesn’t sell the device anymore, not to worry. I found them: Telephonyware is selling unlocked SPA-3000’s for $80 here, and I’ve got one on the way. Enjoy.

With the decline of my Windows 2000 box and the forthcoming transfer of my Windows laptop to Cote, I’ll soon be without a viable Windows machine for the first time in a couple of years. Couple that with a desperate need for a server strength platform to test bed Windows applications such as VMWare, and it’s fairly obvious that I’m going to need a replacement workstation. Within the next few weeks, I’m likely to purchase an Opteron based workstation from Sun via the Start Up Essentials program they’re running. Anybody have any recommendations on models? And are they quieter than they used to be? The old Ultras were only marginally quieter than our V20Z, which is approximately as loud as a small(ish) jet engine. I thought about getting a Mac mini, but my need here is really for a Windows platform (though I’ll likely dual boot it with Solaris).

With that, I’m signing off for the day. I’m going to try and hit Evergreen for some snowshoeing tomorrow – I’ve shoed in weather as cold as -18, so I should be able to manage tomorrow’s temps – but will be laying low otherwise. Enjoy your weekends, even if they’re cold.