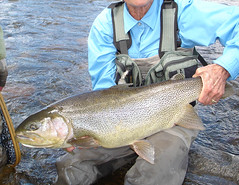 While my efforts to get David‘s brother’s absurdly huge striper considered for Moldy Chum’s (a rather irreverent fishing blog) “Slab of the Year” contest were apparently successful, Hank’s Big Bass appears to be out of the running. No, I have no idea why – that’s the biggest striper I’ve ever seen – it just is. That’s the bad news.

The good news is that another friend of a friend’s fish is still in the running; the massive rainbow trout pictured to the right (no, I didn’t think it was a raindow either at first). Caught up in the mountains this past summer, the fish was landed by a somewhat undersized female fisherman, making the catch all the more impressive on a pound for pound basis.

The bad news is that that fish is currently losing in the Slab of the Year contest to, disgracefully, a koi. I mean, it’s a koi. I don’t care how big it is, a koi cannot win the contest.

The good news is that voting is still open. If you were to visit Moldy Chum, for example, the right hand margin contains a selection of fish including the should-be winner, Rocky Mountain Oh My. Another click on that fish (that’s two, in case you were counting), and you would have played a significant part in rectifying what could be a tragic miscarriage of justice. That’s your good deed for the day, and you would have earned that Wednesday evening beer or glass of wine (to earn the mixed drink you’d have to vote from multiple machines).

So not that I would dream of trying to game the voting for a blog based contest, but if you’ve got six or seven seconds to spare go forth and rig that vote. Or would you rather see a koi win?