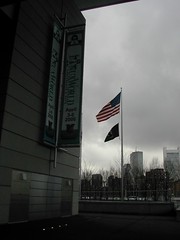 Despite the fact that I missed the first two days of the conference, I’ve had the opportunity to chat with a small horde of different folks since I arrived red eyed and not-so-bushy tailed this morning. Several of the conversations were very interesting; some of which I can discuss, some of which I can’t. To work through some of the chatter, I thought I’d do a Q&A:

Q: First things first – when did you get here?
A: I arrived on the Jet Blue red eye this morning a little after 5, then headed to the hotel for a quick nap. I got to the conference center around 8:30, and had my first meeting at 9.

Q: Having been here all day, what’s been the talk about the actual attendance and energy of the show over the first couple of days?
A: While I’ve done nothing resembling a comprehensive survey, word is that attendance is not what some of the exhibitors expected. Whether that’s true in absolute terms, or merely seems that way relative to the conditions at last year’s Hynes based event (the Hynes is much, much smaller) is unclear.

Q: Who’s attending the show?
A: While there are a number of non-vendor types exhibiting on the show floor, LinuxWorld as I discussed with a variety of folks today, has a decidedly corporate/sales focus to it. It’s quite different in that regard from a show like OSCON, which has a much higher jeans/suit ratio.

Q: Amongst the folks that you’ve spoken to, what’s the talk of the show?
A: Well, it depends on who you talk to. Lots of folks were talking virtualization, what with related announcements from the likes of Microsoft (via Brad Feld, here’s an interesting take on that one), Novell, Red Hat, Virtual Iron – even a tangential one (though obviously not virtualization, per se) from Apple.

But the more significant topic of discussion from where I sit was fragmentation, and the risk it poses.

Q: What do you mean by fragmentation?
A: Here’s what I wrote a week ago:

I’m relating what one ISV discussed with me lately, which was that supporting the multiple Linux distros was less than trivial for them. While they officially supported Red Hat and SuSE, and unofficially Debian, it’s a lot of work. Solaris, they told me, represents a potentially winning combination of unfragmented open source.

In several conversations I had today, the subject of package management – which I sounded the alarm about back in August – was used to make the point that while Linux enjoys certain advantages at the moment, particularly in terms of community size, they’re mitigated to some extent by the duplication of effort. As I outlined it to a couple of folks today, take the example of MySQL: it’s in every Linux distro’s package management system – be that apt-get, Portage, Red Carpet, Yum, etc – but each of the aforementioned distros needs to maintain its own build, b/c they handle package management differently. While that’s sustainable at the moment, b/c Linux is competing with Windows – which has no package management facilities whatsoever, and Solaris – which has yet to decide on its ultimate package management strategy – the longer term implications are unclear. If, for example, Solaris is able to achieve consensus on a single approach, common to Solaris, OpenSolaris and distros such as Nexenta, that would be – IMO, anyway – a significant advantage amongst developers. Perhaps not one that mitigates the massive differences in community sizes, but an advantage nonetheless. And then, of course, there’s the ISV fragmentation question.

Q: ISV fragmentation? Can you explain this further?
A: Sure. I’ve already discussed it to some extent with the quote above, but basically it comes down to the effort required to support different distributions of a given operating system – say, for the sake of argument, Red Hat and SuSE. While some of the people that I speak with protest my belief that supporting multiple distros is problematic by citing their experience in doing just that, some of these same folks argue that they can’t provide official support for Debian because it’s too costly and time consuming. Which reminds me – Debian was a big topic of discussion today.

Q: What were folks saying about Debian?
A: Well, it’s interesting. I’ve been saying for a long time (see especially the comment from Henning Heinz) that commercial ISV’s should support their offerings – wherever possible, financially – on the Debian platform (including Ubuntu by proxy). This belief is mostly driven by the fact that Debian’s community is enormous. When someone asked me about Debian marketshare today relative to claimed numbers from the likes of Red Hat and SuSE, I compared it to the traction of packages like JBoss and MySQL. Revenue numbers, as have traditionally told the story of adoption and marketshare, are nearly irrelevant in this case because they do not account for the huge adoption of Debian in non-production, non-commercial settings.

Several vendor representatives I spoke with today seemed to get this, and were talking around the possibility of supporting Debian. These discussions, for the record, were entirely unsolicited by me – they occured more or less spontaneously. I attribute this in large part to the growing awareness on the part of vendors that community – and its corrolary, volume – play a huge role in size and scope of economic opportunity.

The question ultimately came back to cost, and – indirectly – fragmentation. As ISV’s have pointed out to me on dozens of occasions, supporting (yet) another operating system is not always possible with current budgets. The question then becomes how to get around this, and my answer was twofold: first, look at what Ubuntu has done in self-certifying for DB2, and second, consider supporting subsets of product families to gauge interest.

To the latter point, commercial demand is sort of a chicken or egg thing; while commercial vendors occasionally claim that no one is asking for support for Debian, it’s at least partially attributable to the fact that there are a dearth of available enterprise applications supported on the platform.

Q: Shifting gears for just a moment, how did your panel go?
A: Well, I was still a bit groggy from my red eye (Tylenol PM appears to have no effect on me whatsoever), but I think it was really pretty informative. The participants – Andy Astor from EnterpriseDB, Marten Mickos from MySQL, and Mike Olson from Sleepycat/Oracle – were funny, informative, and challenging to each other while being respectful. Some of the highlights from my vantage point:

Q: What other topics were on your radar today?
A: Well, interestingly, Mono came up more than once today. The first time, it was in the context of a patent discussion. While talking about how patents had the ability to throttle adoption of particular technologies, I happened to mention that the adoption of Mono within Fedora – based, apparently, on the protection Mono is to be afforded by the OIN – was an interesting data point, and one that might have relevance later on down the line. In a separate discussion, I was told that IBM specifically has decided to steer clear of Mono, believing it to be a non-strategic technology, although they have no real objections to Novell’s investments in the area. Besides Mono, there was OpenOffice.org and the Open Document Format.

Q: What was the significance of those conversations?
A: I’ll write more on this later, but essentially the talks focused on the importance of the ODF as a further means of disruption and destabilization of the Microsoft franchises. The difficulty with ODF remains that adoption is largely an underground, behind the scenes phenomenon, because many of the IT leaders in organizations evaluating it that I’ve spoken with are concerned about their job security after what happened in Massachusetts.

Ultimately, the point that I made in several different conversations on the topic – which I’ve made before – is that the best thing that could happen to ODF adoption at this point is the creation of an OpenOffice.org foundation. The project has a window at the moment, with ODF competing against a format (the Office Open XML format) that has no commercially available package until the release of Office 12, but that window will not remain open forever. I’ll write more on that later.

Q: Any last items of interest?
A: Just that conversations around Linux on the desktop are beginning to solidify. There’s nothing imminent, but more vendors are beginning seriously consider the nature of the opportunity – Novell in particular. Watch this space in ’06, I think it could be interesting.

Q: What do you have on tap for tomorrow?
A: Well, I’m hoping to meet with some folks ready to show me some new technology (which they were savvy enough to get into Gentoo so that I could download it tonight ;), as well as luminaries such as Ian Murdock (the -ian of Debian) – but if any of the folks that are reading this will be there, I invite you to give me a ring. Love to chat if I have the time.