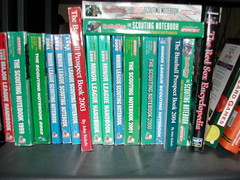 Strange as it may seem to those who know me well, there was once a time when I was just a fan of the Boston Red Sox, rather the game of baseball. Because I didn’t play the sport after maybe the third or fourth grade, choosing to join the majority of my friends on the lacrosse field instead, my interest in baseball was limited more or less to watching maybe a half dozen Sox games a year – with a couple in person attendances during summer vacations at my grand parents places in Massachusetts.

But while at Williams, I had the good fortune to spend my sophomore year living with a couple of rabid baseball fans, and there I was born again as a fan of the National Pastime. Without any conscious effort on my part, I absorbed a small portion of the accumulated baseball knowledge embedded in my suitemates’ heads, and in doing so gave what had seemed a rather staid, simple game radically new dimensions. The nuances of batter vs pitcher, infield positioning, and bullpen usage elevated the game from mere distraction to official obsession.

Ever since, I’ve been finding new ways to fuel that obsession, but it appears that one of my favorite – the STATS, Inc. Scouting Notebook – may have finally reached the end of the line. Every January for the past 7 or 8 years, I’ve looked forward to the release of the several hundred page scouting notebooks, which included profiles for every major league player from the previous season; breakdowns on their offensive and defensive tendencies, pitching arsenals, hitting charts, and the like. It’s not something I’d consume in a single sitting, but rather enjoy over the course of months.

But just this past week, I visited the STATS site and found only the ’05 edition for sale – and have had no better luck on Amazon. In the absence of further information, I’m forced to assume that STATS isn’t putting one out this year, which is sad. Can any of the baseball fans in the audience recommend a replacement text?