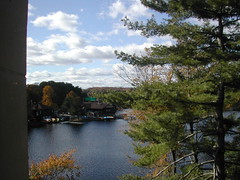 OSBC: Shot of the Boathouse

Ok, while some miscellaneous Flickr shots finish uploading, I might as well get started on the blog queue that’s hanging over my head in Damaclean fashion. So first up is OSBC, Day 2. As you might have gathered from the title of this posting, I found the second day to be at least as rewarding as the first. I’ll admit to being slightly jealous at seeing folks paddling around the lake (see pic) the Newton Marriott overlooked, but overall the second day sealed the deal: OSBC is now on my shortlist (and getting shorter) of conferences to attend.

The sessions themselves were excellent. As Matt said, Jason’s session was of particular interest. His slides are available here (let me know if you want a ODF version, Jason ;), but essentially Jason’s comments were aimed at the conflation of open source with Long Tail distribution – a conflation that Jason doesn’t really buy. I both agree and disagree for reasons that would take too long to explain here, but my academic interest aside, that wasn’t what I found most compelling. It was rather Jason’s closing comments regarding open source (and I’m quoting him as I recorded it, so take it with a grain of salt): “Understand who your communities are, and understand what problems you need to solve.” Such a simple notion, but one that I wholeheartedly can agree with. And simple though it may be, it’s abundantly clear to me that lots of folks have yet to learn that. Nothing time and some open source analysis can’t fix, though 😉

Following this session I caught up briefly with r0ml (his new gig sounds fascinating) and Jason, and then grabbed a couple of minutes with Zimbra’s Scott Dietzen. In case you’re curious, yes I was pressuring him to get some sort of hosted model going yesterday so that I can end my email pain. It doesn’t sound like I’m going to get what I want tomorrow, but he didn’t ignore me either.

While I’m on the topic of Zimbra, it’s worth mentioning that Jason was preceded by demos of things like ActiveGrid and Zimbra that red, white and blew everyone away from what I hear. Having the product before, I wasn’t surprised, but Zimbra had a lot of folks buzzing. Laura reports that their demo “got loud applause from the standing room only crowd.” Speaking of, she’d like to see it on Solaris – as would some of the folks voting here – how about it, Scott?

Anyway, next up was the not to be missed panel session “The Inevitable Evolution of Enterprise Apps to Open Source.” Moderated by Robin Vasan, the MD at Mayfield, it featured a veritable who’s who of open source executives and none other than RedMonk’s favorite enterprise architect:

One of the more interesting interchanges came when Robin (the moderator) asked James (the enterprise architect) whether or not he’d be interested in open source vertical applications, and James answered that if there were open source components that would allow us to get closer to our business problem, “we’d be very intrigued by that.” At which point Powell Newton (Alfresco) interjected with “that’s never going to happen.” Newton’s belief centered around the fact that given commercial open source’s reliance on a 1% conversion model (no, I don’t know where he got the #), an open source vertical industry application would not be economically sustainable. This in turn drew a comment from Fleury (JBoss) who conceded that point, but postulated that there might still be other open source models that would make an open source vertical specific application feasible. That’s an idea I find compelling; aside from the fact that never is a long time, I find it difficult to believe that we won’t see some form of open source vertically specific applications emerge – and as James and I discussed briefly after his panel, it’s not like the insurance industry is small or lacking resources. IIRC – and I might not, IBM’s Bob Sutor expressed a similar belief during his panel at OSCON in August.

But far and away the highlight of this session for me, and indeed the conference – as most of the folks who were in attendance already know – was McGovern’s very public nod towards us, RedMonk. Responding to a question of what open source projects or products were falling under the radar, James replied that actually, he was most interested in the emergence of ‘open source analysis,’ mentioning us and our COA model specifically. Like Hal Stern’s mention of me personally on day 1, James’ comments drew a few quiet mutterings of ‘who the hell is RedMonk?’ from some of the folks sitting around me, but it was certainly appreciated.

Following this session, I was able to sit down and grab some lunch with PSG’s Brenda Michelson, who aside from being a Friend of RedMonk also happens to know more than a bit about enterprise architecture and SOA. We actually chatted right through Moglen’s session, alas, but it was good to catch up on the doings back in my adopted home state of Maine, open source analysis, and some other shop talk. Good times, good times.

The last really subtantial session for me was “Open Source and Web 2.0: The LAMP that Launched a Thousand Startups.” The panel featured the following folks:

A couple of the interesting comments from this session:

Very all over the place panel, but one that I found very compelling. Because there was a lot of talk during the main discussion of scalability, during the Q&A I asked Marten whether or not he was worried if some of the features introduced in MySQL 5.0 such as stored procedures, triggers, etc actually worked against scalability by pushing business logic back to the database, as Adam Bosworth has discussed before. My intention certainly wasn’t to put him on the spot, but Peter Yared was giving me a (good natured) hard time about it after the session so I found Marten later and assured him that it was an honest question, and he was very gracious. His original answer – which I mostly agreed with – was that it was about offering customers a choice. Stored procedures and triggers might not be the right approach all the time, but giving users the option was in his mind a good thing.

While I was clearly running on empty by this point, I then headed over to Friend of RedMonk Stephe Walli’s panel, “Living with Finland and Redmond: Mixed Use or Going Native?” My notes from this session are dramatically less copious than they ought to be, but my recollection is of a conversation around how relentlessly heterogeneous most environments are these days. Despite a couple of attempts at squeezing him, Jason managed very cleverly to not get trapped into discussions of Office/Windows dominance, etc. Still not sure how he managed that.

Anyway, after a session on open source telephony that was not at all what I anticipated, I hopped over to the bar with r0ml and Senor Walli for a couple of refreshing beverages, then headed for home. That’s OSBC for you. Thanks to Matt for a great show, and apologies to anyone I forgot to mention.

For more on OSBC, see my old colleague Gordon Haff’s write up here.