Some impressions from DockerCon. It’s been a month or so since the event, but I didn’t need to be first with coverage.

Docker is increasingly a context for business to get done. It struck me for example was how busy the exhibition hall was. Vendors I spoke to with booths were very happy with the quality of the conversations they were having and leads they were collecting. Attendees came to DockerCon with solid buying intentions, which certainly isn’t always the case with cutting edge developer conferences. Docker has crossed over into the mainstream. Of course crossover status won’t please any tech hipsters, but it’s a necessary step in becoming an enterprise software company.

Datadog’s excellent data analysis, based on SaaS telemetry, helpfully released a few weeks before Dockercon, shows just how strong enterprise penetration is – more than 23% of Datadog’s customers have adopted Docker, and the trend is all up and to the right. What is more, the bigger the customer the greater the adoption and consumption of containers. For organizations with more than 1,000 hosts, a full 47% have adopted Docker. 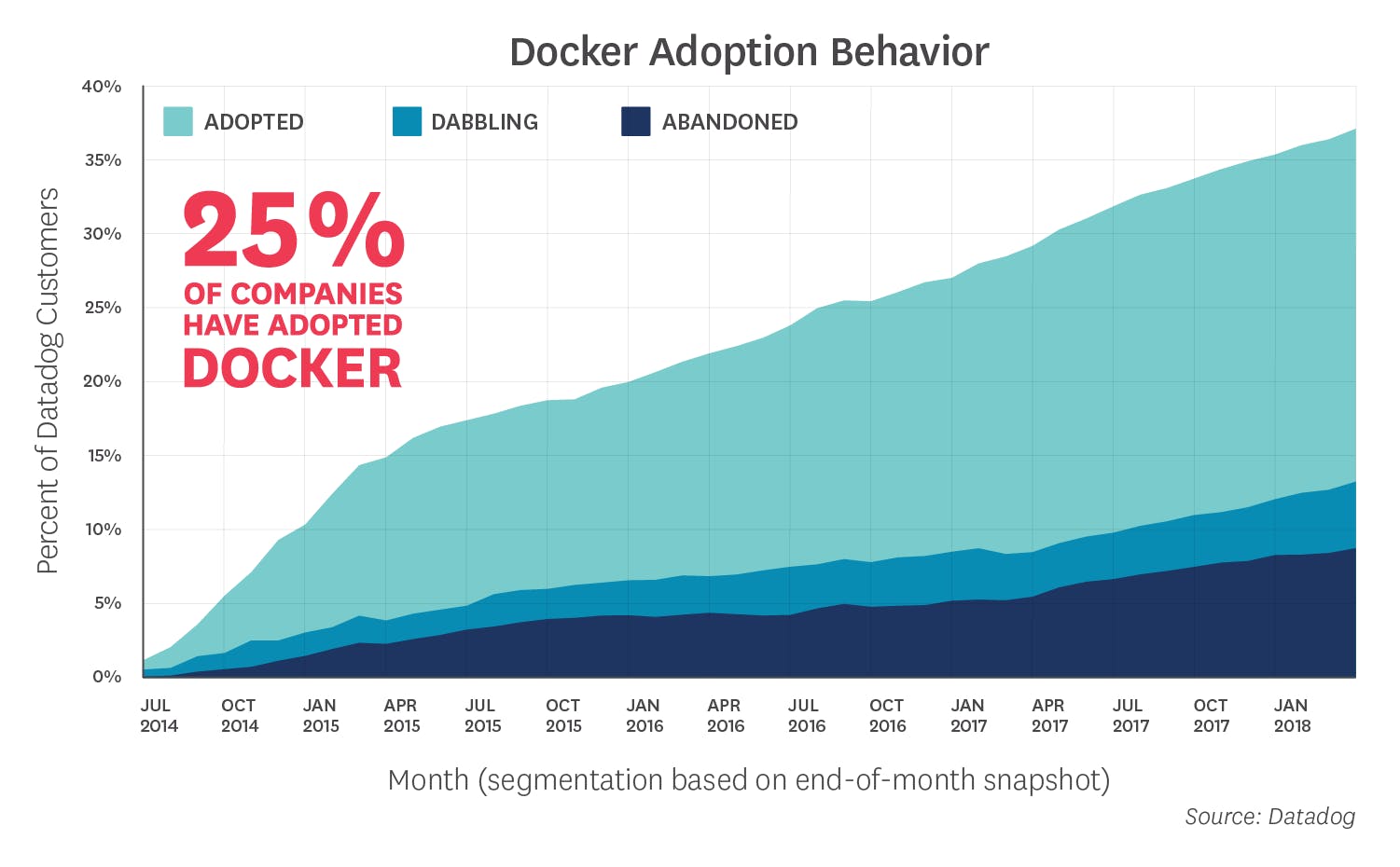 Using Docker, however, doesn’t mean paying Docker. There’s the rub, the classic dilemma for commercial open source companies. Docker has to find ways to turn its penetration into revenues. While all developers run Docker on their laptops, the battle for server-side deployment is another matter.

Kubernetes, meanwhile, is at an interesting stage of its evolution – it won, so now what? While everyone agrees Kubernetes is the de facto orchestration engine for deploying and managing containers, the market is heavily fragmented – see AWS, Azure, Cisco, Google, IBM, Mesosphere, Pivotal, Red Hat OpenShift, Rancher, etc. VMware just launched VMware Kubernetes Engine, and it already supported Pivotal Container Service. Fragmentation opens opportunities for packaging companies, including Docker. Many enterprises are asking whether they can simply adopt “vanilla Kubernetes”, rather than a more traditional distribution. Docker therefore announced Enterprise Edition 2.0, allowing deployment and management of Kubernetes workloads on Azure AKS, AWS EKS and Google GKE. It also demonstrated deployment to Windows server containers, another solid portability win.  As is ever the case with technologies promising portability, the devil is in the detail. Talking of detail, Docker continues to flesh out the runtime. Containerd is the default runtime choice for portability because it essentially runs anywhere. Docker also emphasized its security credentials for devops workflows with EE 2.0. Docker security defaults are a strength of the core platform.

The Dockercon keynote was a little jarring for those tracking the future of software development. The first technical demos were about modernising an app written in Microsoft ASP.NET and a SQL Server database. Docker followed this up by Dockerising Java Pet Store (the classic reference app for Java Platform, Enterprise Edition), migrating it to the cloud, and adding some new functionality.  The optics were very clear – Docker was making an obvious entreaty to enterprises wanting to lift, shift and modernise their legacy estate.

That was really my key takeaway from Dockercon 2018. The company has some neat developer experience stuff in play – for example the new docker-app, designed to make Docker Compose more effective as a collaboration tool for package management. But Docker is focusing on enterprise buyers and legacy workloads.

Rise of the Docker Pattern