Breakin’ Up is Hard To Do, sang Neil Sedaka.

It seems nobody told HPE.

The company is clearly energised by its divestment strategy. Having already announced it would split into two businesses last year – HP Enterprise (servers, storage, services, systems) and HP, Inc (PCs and printers), HPE then recently surprised the market by announcing it was going to acquire CSC and spin out a newco combining the enterprise services assets of both companies.

The services roll up makes a great deal of sense – spinning out a “bad bank” of technical debt locked into long term outsourcing contracts. Markets certainly reacted favourably on the news. 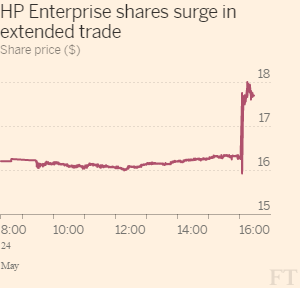 To be fair to CSC it has done some good work in building out hybrid cloud offerings for its customers over the last few years, but the general direction of travel for traditional outsourcing is definitely a downswing. You could of course say the same thing for almost all enterprise IT businesses.

So to divest or not to divest? On that question Dell and HPE are moving in opposing directions. As Dell bulks up, taking on debt to acquire EMC and VMware/Pivotal, HP gets leaner.

I spent last week at HPE Discover, the company’s customer event in Las Vegas. Customers were pretty much unphased by the potential disruption caused by multiple demergers, and executives are seemingly revelling in it. Bottom line- nobody has anywhere to hide any more. Businesses are not going to cross subsidise each other and paper over cracks and faults in the the business.

HPE is now comprised of Software, Enterprise Systems and Financial Services (financing for customers). It would not be a surprise to see HP also spin out the financing business. Borrowing money to fund infrastructure acquisitions is of course not really how things are done in the age of the cloud. Make no mistake – Cloud is a forcing factor for pretty much all of the issues facing incumbent enterprise suppliers today. Cloud is putting pressure on all enterprise software markets – applications, hardware, networking, security, services, software, storage etc.

HPE’s response is to try and become more nimble, and focus in the near term on hardware and software:

One response to the threat of cloud decimating on-premise IT workloads is to try and reframe the issue. So while it makes little or no sense for enterprises to run their own traditional data centres there are going to be areas where processing will move to the edge. Consider for example that a Boeing Dreamliner has a 42u rack server on board. Or in automotive cars are increasingly digital- the server in the boot. The idea behind the reframing is that rather than instantly push all data into the cloud as it is collected, which would require perfect, high performance cheap networking, it should be partially filtered and analysed “at the edge”. Data gravity is after all a thing. To support its edge story HPE last week pointed to a set of products originally announced in London in December called the Edgeline IoT Systems 10 and 20, running Microsoft Azure IoT Suite and Windows 10 – including ruggedised versions. HP has a partnership with GE around Edgeline, which is a decent start in building an ecosystem. Interestingly, HP also sees a potential role as an OEM, as its customers and partners roll their own edge offerings.

What if edge is the new on prem? HP isn’t the only pursuing this story. Also last week IBM and Cisco announced a new set of “edge” offerings to run IBM’s Watson for IoT software on Cisco network gear.

One argument in favour of the edge argument could be the rise of the smartphone. The internet didn’t kill native operating systems, it enabled them. We don’t run around using pure web apps on thin phones; rather the phones get thicker and slicker all the time. The internet created entirely new form factors for edge computing. The internet of things could repeat the trick.

But what about software and how we live now?

I presented at two customer sessions on Monday about how software development and management is changing. The cloud native companies have retaught us that engineering for scale requires trade-offs around consistency, availability and partition tolerance. Testing is part of the development process. Requirements can’t be fully known. Waterfall doesn’t allow for anything like continuous improvement. HP’s customers are very receptive to learning from web company methods and tools.

HP is retooling accordingly, and its customers are also beginning to. In both sessions, one for Quality Center customers, and one for LoadRunner and StormRunner (Performance Engineering), when I asked who was using Jenkins literally every customer in the room put their hands up. For more context you should also check out this post from my colleague Fintan CI: The Cloud Native On Ramp and The Dominance of Jenkins.

The company has got the memo around packaging (open source) – HPE ALM Octane embraces GIT, Jenkins, even Cucumber for specifications/requirements collaboration.

Instead HPE is focusing on tagging and search, relationships, pipeline support and open APIs.

HPE is taking the same tack with public cloud (rather than looking to replace functionality already available there) it is trying to move up the stack, positioning Helion as a hybrid environment for running apps on prem on or in the public cloud. HPE is packaging up OpenStack and CloudFoundry for infrastructure and platform as a service, having acquired Stackato from ActiveState. The approach is not heavily differentiated, but it is standard – IBM and SAP are on similar tacks, and HPE can also sell into customers adopting Pivotal as a hedge.

In conclusion, HPE still has a ton of work to do to be a growth company going forward. RedMonk would argue the company needs a stronger more opinionated SaaS story. It’s one thing for customers to say they aren’t ready to be all in on cloud, but the consumability advantages of cloud delivery are inarguable. HP’s Haven On Demand machine learning APIs show the way here – easy to ease, well documented, lowering barriers to entry, consumable by developers – in terms of delivering the portfolio as HPE rebuilds it SaaS is easier than on prem, and customers are happy to pay for it; software licenses not so much at this point in time. On prem hardware is not a great market to be in, but it’s still worth tens of billions of dollars – HP, Cisco and Dell have a huge fight ahead.

HPE is getting lean for it, rather than bulking up.