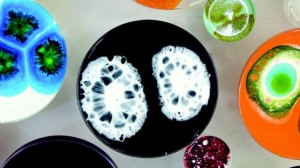 RedMonk likes biological metaphors. Here is Stephen for example talking about Shadow IT and “good bacteria”. That said, those metaphors can go too far (he said, digging a SOG post from 2003 out of the crate).

Yesterday I posted about how data is the new hotness in cloud. We’ve seeing a radical decoupling of data from data model, data from reliance on a particular store. Data should not be an artefact of a particular application if we want it to be extensible and useful.

Anyway I got a brilliant tweeted comment on the post by Neil Levine, VP Product at Inktank, the sponsor of Ceph.

“It’s the data, stupid” by @monkchips http://t.co/XpkXqKtjuP “Cloud” is the banner under which new storage techs are being tried @Ceph

Blammo! I might rephrase that Cloud is the banner under which new data techs are being tried, but the argument is spot on. You can use anything with anything now. The store does not dictate the app.

See for example, this slide, Mongo to Neo4j to Elastic Search, each store playing a specific role:

WE’re seeing tool chains like this emerge, fork, decay, reuse, evolve, die, rinse and repeat. The cloud really does free up data. Take a snapshot to RIAK. Take one to Mongo. Drop some data into HBase. Its all good. Well good, except for the relational database franchise, which is now coming under really severe scrutiny. The data model no longer defines us. Neither does disk. The flowers are blooming. A culture of experimentation is upon us in the world of data, driven by Web Developers and the Cloud.

The artist behind the beautiful petri dish image is Klari Reis.