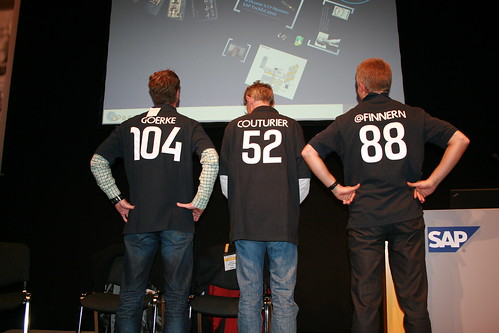 Its always nice to see others building on your ideas, so it was cool to see some folks from the SAP Mentor community take up the gauntlet. At RedMonk we like to say developers are the new kingmakers, because of the increasing influence they wield on business innovation, from the bottom up. Of course some are quite skeptical of the idea that developers are influential, often because they see the IT world through the lens of the product purchaser.

In a post today for his SAP Community Network blog Owen Pettiford said (Good SAP Savvy) Developers are the new Kingmakers asks why more people haven’t got the memo about developer innovation yet.

“To answer this we need to look back to see how developers were viewed about 10 years ago. Many organisations took a look at their IT developers (geeks) and decided that IT development was a commodity that could be given to a 3rd party provider and so IT was outsourced across the globe. Most of these outsourced deals focused on driving down the cost of IT (it was viewed as a commodity after all).

What this often also drove out of the deal was any wiggle room for Developer Innovation. 10 years on this means that many organisations and IT outsource providers have all but forgotten how to innovate – SLAs and Margins are king. In effect organisations have thrown out the baby with the bath water.”

“This doesn’t mean that the traditional skills required to configure the SAP business systems are not important it is more that to make your SAP system stand out from the crowd (and do stuff your competion can’t) you need developers to build (hopefully cool) stuff on top of it.”

SAP and JQuery, SAP and in-memory database, SAP and RESTful development, that kind of thing.

The Mentors are a great group of people, which has been explicitly fostered by SAP management to allow for innovation across what Hugh MacLeod calls the porous membrane. The pied piper of the Mentors is a guy called Mark Finnern. Not coincidentally the SAP Mentors are big MacLeod fans.

The Mentor community is run alongside the SAP Blogger community, another strategic initiative led by the redoubtable Mike Prosceno. What does strategic mean? SAP’s Blogger program has a real travel budget and gives you CEO-level access at events. Same for the Mentors, I believe.

It is increasingly obvious the Mentors are the new kingmakers at SAP, they are gatekeepers. If you’re a product manager and you can’t get the Mentors on-board chances are good your product won’t get the management or market attention you’re hoping for. SAP briefs the Mentors, many of whom are software developers, though not exclusively so, under NDA and gets early feedback on what works. This feedback is as often as not in the best form- an application based on the platform in question. The Mentors include customers and SAP employees – and have their own independent culture. They drink the cool-aid, but only to get rid of the taste of jagermeister. Dissent is encouraged: noted curmudgeon Dennis Howlett is a Mentor, and he gets all misty-eyed when he talks about the community. Its also important to stress this is a group steeped in business domain expertise: Its not just nerds, its savvy nerds that have also cut their teeth on business process work. Oh yeah- and they’re all social media savvy. And GREAT fun. the Mentors are a Trusted Adviser Community. Awesome product feedback for the price of a hotel and a flight – that’s a pretty good return.

Other vendors have equivalent programs – IBM has recently started building its own, similar, program called Champions. Microsoft has its Most Valued Professionals.

But the bottom line is SAP has built something world class here. Its not open source, but it is open development. It’s co-innovation. Of course a Mentor program is only one element of a good Developer Relations program, but its a great base to build on.

Developers are the new kingmakers, and the many years and dollars SAP has spent building communities ready for the coronation are likely to pay dividends.

disclosure: SAP, Microsoft and IBM are all clients