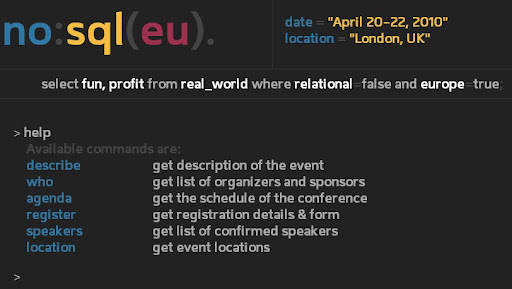 One of the hottest topics in software development right now is what is being called NoSQL. What is that? I kind of like the definition from no-sqldatabase.org

NoSQL databases mostly address some of the points: being non-relational, distributed, open-source and horizontal scalable. The original intention has been modern web-scale databases. The movement began early 2009 and is growing rapidly. Often more characteristics apply as: schema-free, replication support, easy API, eventually consistency / BASE (not ACID), and more. So the misleading term “nosql” (the community now translates it mostly with “not only sql”) should be seen as an alias to something like the definition above.

For as long as RedMonk has been in business we have questioned relational-for-everything orthodoxy, so NoSQL is very much a natural fit for us.  Here for example is Stephen talking to Breaking The Relational Chains in 2005. Of course you could say Stephen was just channeling the work of Adam Bosworth – in our database work we’ve been failing to Learn From The Web – but what is RedMonk’s role if not to understand and hopefully amplify points made by the smartest developers on the planet?

Anyway – I had been planning to run a show in London called LessSQL (i found the binary position in “NoSQL” somewhat unhelpful) when we came across plans to put on NoSQL EU. Rather than compete it made sense to join Oredev and Emile “Neo4J” Eifrem in running a great show.

And I do think the show will totally rock. As my partner in London event crime, Matt Patterson explains:

There’s just over a week to go until NoSQL Europe, our conference about NoSQL technologies, and how you use them. We’ve got a fantastic line up, including keynotes from Amazon’s Werner Vogels, The Guardian’s Matt Wall; speakers from Twitter, The BBC, Rackspace, Basho, 10gen, Neo Technology and many others over 2 days. We have some fantastic workshops lined up on Riak, MongoDB, Redis, and Neo4J, from members of their development teams or core contributors.

Are you a European web or enterprise developer interested in using different approaches to scale data-driven apps, who wants to know Where have All The Good Databases Gone?  Then this is the show for you. Tickets are available here.