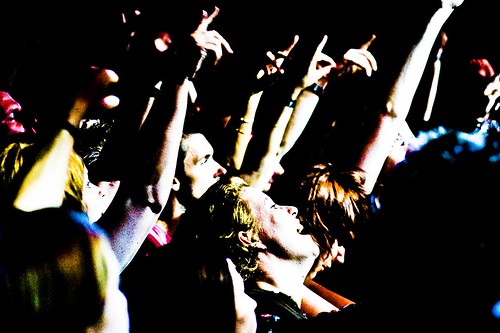 You’re sitting at the back of the room in a large auditorium. There is a guy up front, and he is having a conversation with the people in the front few rows. You can’t hear them quite so well, although it seems like you can tune into them if you listen carefully. But his voice is loud, clear and resonant. You have something to add to the conversation, and almost as soon as you think of it he looks right at you, and says thanks for the contribution… great idea. Then repeats it to the rest of the group.

When Twitter was first built it was intended for small groups of friends to communicate about going to the movies or the pub. It was never designed to cope with crazy popular people like Kevin Rose (@kevinrose 76,185 followers), Jason Calacanis (@jasoncalacanis 42,491), and Scobleizer (@scobleizer 41,916).

But Twitter wasn’t designed for whales. It was designed for small shoals of fish. Which brings us to one of the big issues with Asymmetrical Follow – it introduces unexpected scaling problems. Twitter’s architecture didn’t cope all that well at first, but has performed a lot better since the message broker was re-architected using Scala LIFT, a new web application programming framework). The technical approach that is most appropriate to support Asymmetrical Follow is well known in the world of high scale enterprise messaging- its called Publish And Subscribe.

But Publish and Subscribe also talks to the social aspects of Asymmetrical Follow. As @Jobsworth puts it:

“I think we would be far better off considering Twitter as neither Pull nor Push, but instead as Pub-Sub, as Publish-Subscribe. The first and most beautiful thing about Twitter, as far as I am concerned, is that I only see the tweets of people I follow, people whose tweets I subscribe to. It is up to me to decide how many people I can follow. For some people this may be a Dunbar number, stabilising around 150, perhaps finding a Twitter adjustment to that number and raising it. Others may be Scoblesque in their reach, dissatisfied unless they push the 5000 limit (as in Facebook; I must admit I have no idea what the Twitter limit is).

So one way of avoiding increasing noise levels is to avoid increasing the network beyond one’s capacity. I can choose to “follow” (or subscribe to tweets from) just as many people as I am able to cope with. This is not something you can do easily with BlackBerry or with e-mail in general.”

There are those that would would say their is something “wrong” with Asymmetrical Follow, which I would argue is just a function of the power laws you see in any community. For example, yesterday Benjamin Ellis (@bmje) said:

“@timoreilly @monkchips Asymmetric follow is a hack in social software to enable ‘relationships’ to scale. It is broadcast, not conversation”

Pretty much the worst insult you can lay at the door of something Web 2.0 is that its not “conversational”. Ouch- the Cluetrain dog whistle.

That’s the point see. Asymmetrical Follow doesn’t mean broadcast, its just a conversation in which one node has more connections, and likely can’t personally scale to manage them all. Opt in or opt out. You can address the root nodes. Or to put it more eloquently, back to @bmje:

@timoreilly the wonderful power off twitter and good people – its asymmetry is only partial, due to the power of @’s 🙂

I have been giving Asymmetrical Follow a fair amount of thought lately. Certainly reaching 3000 followers has something to do with it. For me Twitter is a tool, as well as a conversation. Yesterday I got a request from a PR agency to brief me on a mobile IM technology called Palringo. I had never heard of it. But plenty of people in my network had. And I could engage with them because they could use an @reply which I would see, even though I didn’t necessarily follow them back. As a researcher this kind of function is invaluable. Just imagine the power of Jeremiah Owyang‘s twinstant research network of 17,019 followers.

Of course it can seem mercenary to actually try and build your twitter presence. I certainly wouldn’t take all of Guy Kawasaki’s advice on how to pick up followers. I *hate* machine-generated tweets, for example. But to use Twitter or any other social networks as a tool you should think about methods.

Of course these effects are not limited to Twitter: but it has done an amazing job of offering a platform for Asymmetrical Follow. This is particularly true when you consider that the notion of the @reply (where you begin a reply with the users name) was a community generated convention. We thought of it- Twitter just formalised it. And became the most powerful word of mouth platform on the planet in the process.

Its kind of amusing to me that Facebook now says: anyone with more than 5000 friends is a business. What. The. Heck? Scoble reports that the service’s 5000 follower limit is actually a technical scaling limitation, written into policy.

How ironic that Twitter, the service known for the Fail Whale, doesn’t Fail its Whales. It supports them and the core pattern of Asymmetric Follow.

Twitter has allowed users to find a path, and then laid down the paving stones to support it.

If you’re building a social network platform its critical that you consider the technical and social implications of Asymmetrical Follow. You may not expect it, but its part of the physics of social networks. Shirky wrote the book on this. Don’t expect a Gaussian distribution.

I have a lot to do today, so I need to get to it. But I would love your ideas to help build out this theory.

[bonus update: Jeremiah says he read this a few times and it needs a definition. How about that? I thought this piece was a definition. But Jeremiah is really good at taking ideas to the mainstream, so I need to take the advice.