I had lunch with Jon Udell the other day (fanboy!) He was passing through London on his way to a conference about Apprenticeship in the age of the Internet. Great to meet him finally.

We ended up at a great new restaurant in London called the Acorn House. We knew nothing about it when we arrived. We just walked down Greys Inn Road looking for food that wasn’t dismal. We were in luck when I noticed some squashes on a chair across the road…

The Times just described it as the most important restaurant to open in the last 200 years. High praise indeed. The owners look happy enough, which is a good sign. Arthur seems a really nice chap, and the homemade perry (“hard” cider made from pears) from his parents’ neighbour’s farm was excellent. 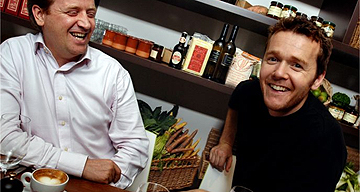 picture borrowed from the Guardian.

So what marks out the Acorn House? It is aiming for sustainability, with a worm farm and extensive composting to recycle food waste, with a commitment to sourcing food ethically and locally to London.

What Jon and I missed though was that, while we talked about the 21st century apprenticeship, that’s exactly what Acorn House is trying to build. The ten people working there have been ear-marked as potential Green restauranteurs of the future by the management. I really like this notion of pushing an approach to sustainability alongside a focus on food to the next generation of owners. However Arthur and co are not social software oriented- its a shame because it would be brilliant to see them documenting their experiences with blogs/videocasts and so on.

Here is what Jon says about craft.

My argument is that for most of human history, in tribal life, village life, or farm life, it was common to be able to watch people do their daily work. Kids who grew up on a farm, for example, saw the whole picture — animal husbandry, equipment maintenance, finance. They understood more about work than kids who only saw dad go to the office, do nobody knew what, and return at the end of the day.

To the extent that we now find it culturally acceptable to narrate our work online, in textual and especially in multimedia formats, we can among other things function as teachers and mentors. We can open windows into our work worlds through which people can find out, much more than was ever possible before, what it is like to do various kinds of work.

I should report however our salads were – mouthwatering. Nicest green touch – when you leave they give you a mathbook. But its not really a matchbook. Its flower seeds, just pull out the “match” and plant in a compost pot. .. From little acorns.